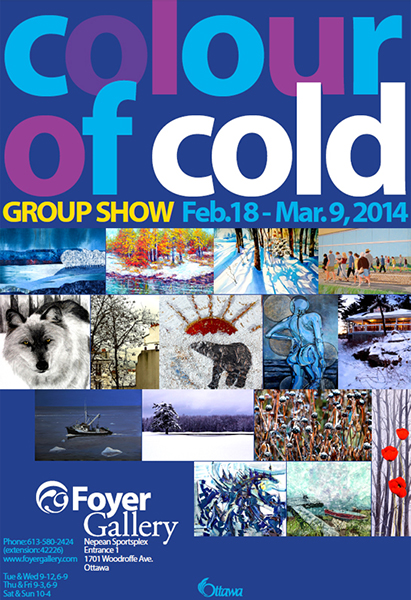 “Colour of Cold” is a group show featuring all members of the Foyer Gallery. This exhibition will run from Tuesday February 18, 2014 to Sunday March 9, 2014.

The current exhibition at the Foyer Gallery is called “Color of Cold”.  It opened on February the 18th and will continue until March 9th.  Seventeen artists are exhibiting samples of their art in both painting and photography.

I will comment on a few of them beginning with the work of Mario Cerroni.  He has only one work in the show, a photograph called “String Theory”.  It shows thirty-two pieces of woven yarn with the tassels at the end hanging before a red surface.  I suspect that a considerable amount of time was spent in arranging them because the effect they create is too good to be the result of a casual incidence.

Close beside it is a large painting by Gerald Smith, called “Reflections” showing members of his family leaving a museum being reflected in the mirrored outer walls of that museum in central Saskatchewan.  All but the last two people are preoccupied in their conversations.  The last two suddenly see their reflections and are stopped in their tracks by the encounter.

To the left of this is a most interesting and pleasing photo-based digital print by Robert Arnold called “Walk in the Park NYC”.  The trees in the park are most effective as they spread out over the walking pedestrians.  This is a gem.

Luminita Serbanescu is showing four small paintings in acrylic, all of which are pleasing and accomplished works of art.  I like the one called “Flying” which shows three young people at the bow of a boat holding their arms out and enjoying the moment.  Another one by her is called “Lighthouse”. It is an interpretation of the iconic Peggy’s Cove Light rendered in glorious reds, blues and whites.  Kudos for her sense of color and paint handling.

Margaret Chwialkowska is showing two works both in her usual flamboyant paint application method.  I like them both, especially the one called “Forest Dark, Gatineau”.  Beside this is a most accomplished and pleasing painting in acrylic by Terry Cowan called “Winter Fishing”, Caraquet, N.B.  The floating ice cake in the foreground which is repeating the shape of the fishing boat is “icing on the cake”, so to speak.  The color of the sky and water, both being bluish gray, sets the mood for the work.  This has to be seen to be appreciated.

There is an impressive photo display by Bill Woodley called “Mendenhall Glacier”.  This poetic interpretation of a natural phenomena shows with great clarity the slow, relentless descent of a huge ice field into the sea.

There are many other works that I could comment on in this impressive show, but I will comment on one more and that is the winter scene called “Straight Ahead” by Jessie Parker.  It shows a tree-lined street in winter in a country setting with blowing snow obscuring the path ahead.  Even at some distance the effect is still powerful.

SELECTED ARTWORKS FROM THE CURRENT SHOW. Click on the image to enlarge it!

Viewers’ Choice Award for “The Glow Of Winter”